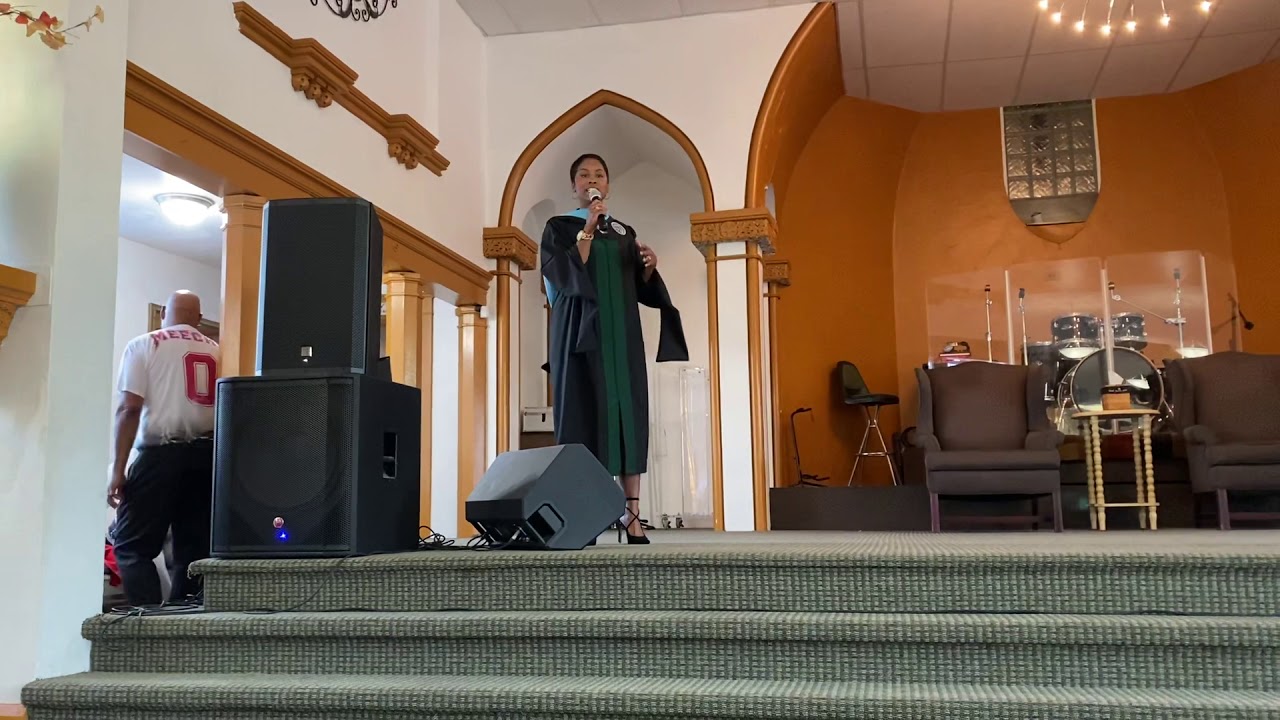 CLEVELAND – The sign outside the Harvest Time Evangelistic Ministries Worship Center boasts two names at the bottom in red lettering and one slogan.

“It’s Not Just A Church, It’s An Experience,” the sign reads, just above the names of Pastors William and Narbell Johnson. The place of worship on the east side of Cleveland sits in the middle of a neighborhood, a church with 26 pews on the upper floor and a basement just big enough to host special occasions.

Sunday afternoon, Demetrius Johnson Sr. was on the altar speaking of his son, “Meechie” Johnson Jr., who had just announced that he was graduating early from Garfield Heights High School and will be enrolling at Ohio State in December. Earlier that day, the dad had been in the same spot, leading the 11 a.m. worship service in place of his dad, William – the name from the sign, and who on his 58th birthday is also in a fight with colon cancer.

That’s three generations of Johnsons, united by blood and cohabitants of this special place. To be able to celebrate William Johnson’s oldest grandson and send him onto the next stage of his career was a community event, one witnessed by friends, family – extended and close alike.

“It meant everything (to do this here),” Meechie Johnson Jr. told The Dispatch. “My granddad, he’s a fighter. He has cancer right now and my heart and prayers every day is towards him, and my grandmother is also going through the same thing. Because they’re going through this and they’re fighting, being here every Sunday, Bible studies and everything, it gives me the courage and the pride to keep going so my family can see me prosper and continue to grow.”

There were multiple signs of that during the event, which lasted roughly an hour and featured one big surprise that led to the only thing the future Ohio State guard struggled with. Because he won’t have an actual high school graduation, Joni Wanderstock, an intervention specialist at Garfield Heights, conducted a personal ceremony that ended with Anita Johnson, Meechie’s stepmother, presenting him with his diploma.

A red carpet was unrolled down the center aisle of the church, but once Meechie walked it and was asked to move his tassel from one side of his cap to the other, he eventually required assistance as he seemed lost in the unplanned moment.

“He is a really smart individual, and I did not want that to go unnoticed,” Anita Johnson said. “Because he will not have a formal graduation, this is a surprise to him.”

Before making his announcement, Meechie spent roughly five minutes thanking dozens of family members and others who helped him navigate a torn anterior cruciate ligament in his right knee that wiped out his junior season and then a transfer from Garfield Heights to the nearby Andrews Osborne Academy and then back again. After Meechie took questions from reporters, the event wrapped up as one family friend shouted out, "O-H!" from a few pews back.

A raucous "I-O" greeted the cheer, which brought a smile to Meechie's face.

“One of the greatest characteristics of his family is their humbleness,” Wanderstock said. “(His uncle) Sonny was Mr. Ohio Basketball, but if you were to ask him about it, he would probably deny it. Those grandparents, unbelievable.”

Both grandparents were at the ceremony, seated at the altar to Meechie’s left. Like the rest of the family, when the announcement was made they stood, applauded and showed off custom-made shirts with Meechie and an Ohio State logo on the front and his last name above a Block ‘O’ on the back.

Those were created by his stepmom. As he tried to put the day into words, Demetrius Sr. had to fight back tears while standing at a spot where he routinely preaches.

“Going to Ohio State definitely had a lot to do with the family,” Meechie Jr. said. “At the time I committed, my granddad has this little thing going on. Ohio State is two hours away so it would’ve been easy for everyone to get down there. And it felt like a family with them down there, too. I feel like I’m at home. It’s been a dream school of mine.

“There’s a lot of big schools that wanted me, but that’s where I wanted to be. I don’t just have my city on my back, I have the whole state because this is where I’m from.”

More broadly, he was speaking of the state. More specifically, he could have been pointing to the exact place where he stood, inside the church his family calls home. The one with the basement decked out in scarlet and gray, a spot for the community to celebrate one of their own moving one step closer to his ultimate goal of reaching the NBA.

Once he gets to Ohio State, trips to this church will become much more infrequent for Meechie. It’s part of the process. For now, though, he was enjoying the fact that Sunday required multiple trips to East 79th Avenue.

“I was here this morning,” Meechie Johnson Jr. said. “I went to go buy a white collared shirt, but I came this morning and gave God His praise and thanked Him for everything. I worshipped with my fellow church people and waited for this moment and now I’m going to enjoy it and after today get back to work.”