Chris Holtmann: Buckeyes need to learn to play against pressure 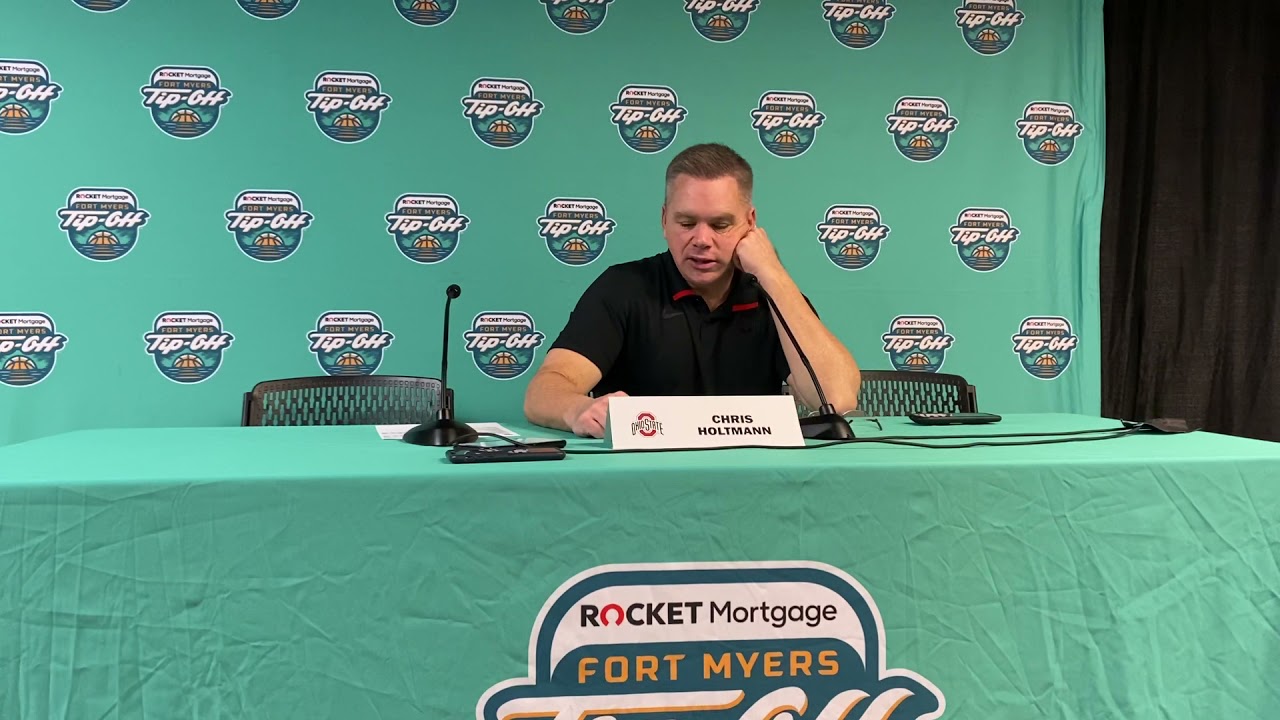 FORT MYERS, Fla. – Aside from the final play, there wasn’t one big gator chomp that handed Ohio State a last-second defeat in the title game of the Fort Myers Tip-Off. As time expired, Tyree Appleby’s 3-pointer set off a raucous celebration inside Suncoast Credit Union Arena as the No. 23 Gators handed the Buckeyes a 71-68 defeat.

That Florida was in position to snatch the win was the result of an occasionally suffocating pressure defense, a dogged approach to the offensive glass and, yes, a favorable whistle or two. The Gators used their speed and strength to consistently put their opponent under duress, and for an Ohio State team still figuring out what its revamped backcourt can and can’t do, it was too much.

“I thought their pressure really bothered us,” Ohio State coach Chris Holtmann said. “I thought they were really physical, physical on the ball, physical on drives. Defensively we were able to bother them when we could get our defense set, but giving them open-floor opportunities or offensive rebound opportunities was the difference, really, in the game. That, and just the number of times they got to the line.”

There were plenty of free throws. The Gators went 23 for 33 (69.7%) from the line, the most attempts for an Ohio State opponent since Indiana had 36 in a 66-54 home win against the Buckeyes on Jan. 11, 2020. The Buckeyes were whistled for 24 fouls compared to 20 for the Gators, two of which came with the same amount of time on the clock and helped Florida keep pace during the second half. With 9:03 to play, Kyle Young was called for his fifth foul as Ohio State led 51-45.

Holtmann didn’t agree with the call, and he was assessed his second technical foul in as many games. The Gators got four free throws, Ohio State had 10 team fouls compared to three for the Gators and that six-point lead was down to two.

“Obviously disappointed I got a technical,” Holtmann said.

The fouls weren’t what killed Ohio State in this game, though. They were a symptom.

The Buckeyes committed a season-high 18 turnovers that Florida turned into 22 points while Ohio State turned 11 Gators giveaways into only 10 points. Those turnovers meant that Ohio State attempted a season-low 47 shots in a game where it shot a season-best 71.4% from inside the 3-point line. Florida shot 36.7% from the floor (22 for 60) but tracked down 16 of those 38 misses (42.1%) and turned them in 16 second-chance points. Florida only made 22 field goals, a season-low mark for an Ohio State opponent.

“Down the stretch we just didn’t execute like we wanted to,” fifth-year Penn State transfer guard Jamari Wheeler said. “Turned the ball over too much as a unit. Once you have too many turnovers then you can’t get shots up, so that was one of the bigger things. We were just loose with the ball a lot tonight.”

Wheeler was the only Ohio State guard to play more than six minutes and not turn it over, finishing with two assists in 23:43. The other primary backcourt members, Malaki Branham, Meechie Johnson Jr. and Jimmy Sotos, all had three each. A fourth of Branham’s was credited to Joey Brunk, who couldn’t get his hands on a lob pass Branham sailed too high.

E.J. Liddell, who led the Buckeyes with 23 points, also tied a career high by committing a game-high five turnovers.

So while the Buckeyes shot 53.2% from the floor, outscored Florida 34-28 in the paint and led for 33:24, it still added up to a three-point loss in a third game already this season decided in the final seconds.

“I just thought it was a game where we had to be really resilient and respond and make the necessary plays,” Holtmann said. “I think it was one of those kinds of games. It was an ugly game at times, but extremely physical. We just weren’t able to get to our spots offensively.”